In an interview with officials in the Sichuan Province Religious Affairs Department, we were unable to obtain exact numbers on monasteries in Sichuan because of the “difficulties” of defining a monastery. According to the officials, there were more than 900 Tibetan monasteries in Sichuan in the 1950s, compared to more than 780 in 1999. Exact figures for monasteries of the different orders were unavailable, but a list of approximate numbers, which was read to us during the interview, indicated the following breakdown as of 1999: more than 300 Nyingmapa, more than 200 Gelugpa, about 100 Sakyapa, 40 Kagyupa, and more than 20 Jonangpa. We were also told that there were 4 or 5 “not belonging to a specific order” and more than 90 Bön monasteries. As for their locations, the officials stated that about 250 were located in Ngaba Prefecture, more than 500 were in Kandze, and 16 were in Liangshan Yi Autonomous Prefecture. Among the latter, 15 (all Gelugpa monasteries) were said to be located in Mili (Muli) TAC. Another 2 Tibetan Buddhist monasteries were reportedly located in Yuanyuan and Baoxing Counties. 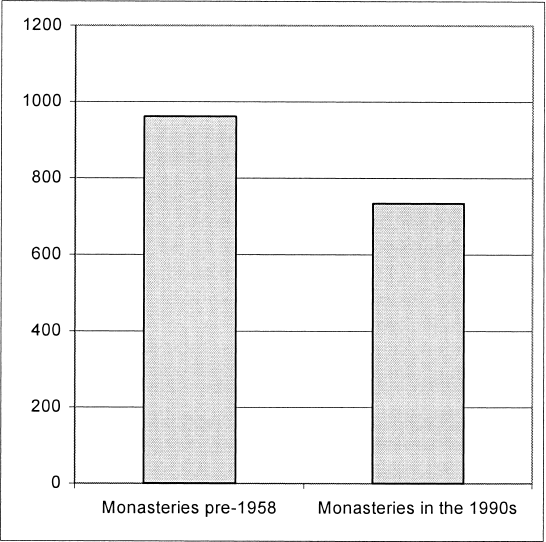 CHART A3.1. Monasteries in Sichuan

The Sichuan Province Religious Affairs Department did not want to comment on the number of monks in the 1950s but claimed that the approximate number in 1999 was more than 50,000, which included 8,000 lamas, more than 40,000 draba, 3,000 nuns, and 500 tulkus. Officials informed us that Ngaba Prefecture had 10 nunneries at present, while Kandze TAP had more than 20 nunneries.

After comparing different sources and evaluating the amount of detail they provide, we regard the figures in table A3.1 as the most reliable.

TABLE A3.1. Monasteries and Monks in Sichuan 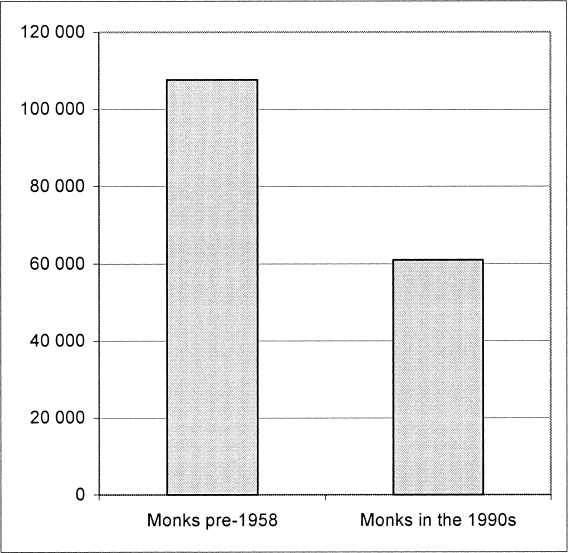 CHART A3.2. Monks in Sichuan

A number of different sources give information on the situation in Kandze TAP. The Kandze TAP Religious Affairs Department claimed that the prefecture had as many as 597 monasteries in the early 1950s, but, as did the provincial authorities, they pointed out that the definition of a monastery was wider than it is today. They also reported that the prefecture had 80,000 monks, nuns, and tulkus in the 1950s, comprising 15 percent of the population. Even more detailed information on the numbers of monasteries in Kandze prior to 1958 can be found in a report published by the Sichuan Province Ethnic Affairs Commission. These figures are listed in table A3.2 in the section on Kandze below. 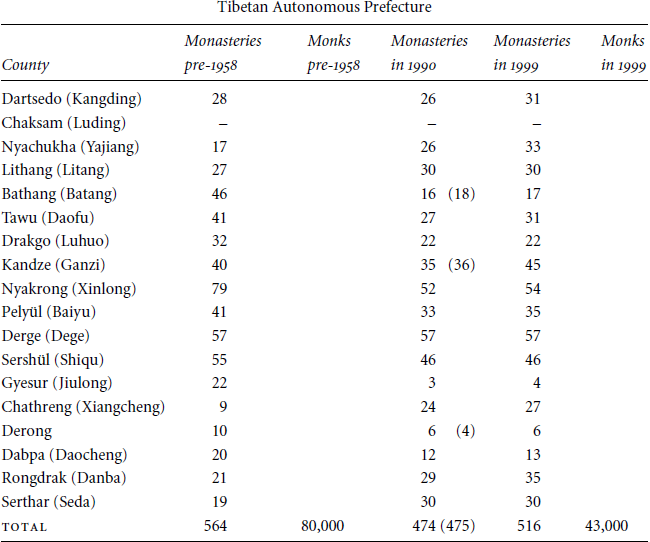 SOURCE, MONASTERIES IN 1999: Interview with the religious affairs department in Kangding, May 2000. Note: An official in the Sichuan Province Religious Affairs Department confirmed that Kandze had more than 500 Tibetan monasteries in 2000.

SOURCE, MONKS IN 1999: Interview with the religious affairs department in Kangding, May 2000. Note: In comparison, Ganzi Zhou zhi reports the current number of monks and nuns as 54,000, comprising 13 percent of the population (319–35).

We do not have as much detailed information about the number of monasteries in the neighboring prefecture of Ngaba. Several written sources provide information on the numbers of monks and monasteries in Ngaba Prefecture, but all of them give different figures. The Ngaba Prefecture History gives a comprehensive list of monasteries, by order, before 1958: 108 Gelugpa, 116 Nyingmapa, 18 Sakyapa, 34 Jonangpa, and 62 Bön. This adds up to 338 monasteries, although presumably at least 5 rebuilt Kagyupa monasteries should be added to the list, since they most likely existed in the 1950s. This would give a total of 343 monasteries. China’s Tibet (no. 1, 1998) reports that 201 monasteries were reopened in the prefecture: 60 Gelugpa, 70 Nyingmapa, 13 Sakyapa, 18 Jonangpa, 5 Kagyupa, and 35 Bön. The article also states that Ngaba had 120 tulkus at that time. These two sources are the most detailed we have been able to find, and we regard them as the most reliable. Unfortunately, neither of them compares the situation today with that prior to the destruction that took place during the Democratic Reforms campaign.

According to the Ngaba Prefecture Religious Affairs Department, there were a total of 280 religious sites in the prefecture in 1999, including mosques, and 18,000 monks and clerics. The department was unable to give us further details about the number of Tibetan Buddhist and Bön monasteries and monks in the prefecture. However, we collected an almost complete set of county histories from Ngaba, which in most cases contain information on the situation before 1958 and in the 1990s. The county histories list a total of 248 monasteries before 1958, with more than 17,710 monks. They also list altogether 195 monasteries in the 1990s, with more than 13,068 monks. Unfortunately, these sources are too incomplete to provide information on the prefecture as a whole, although some give detailed information for both the pre-1958 period and the 1990s, which enables us to compare the figures for each county from the same source. The information drawn from these county histories is listed in table A3.3.

TABLE A3.3. Monasteries and Monks in Ngaba (Aba) Tibetan and Qiang Autonomous Prefecture 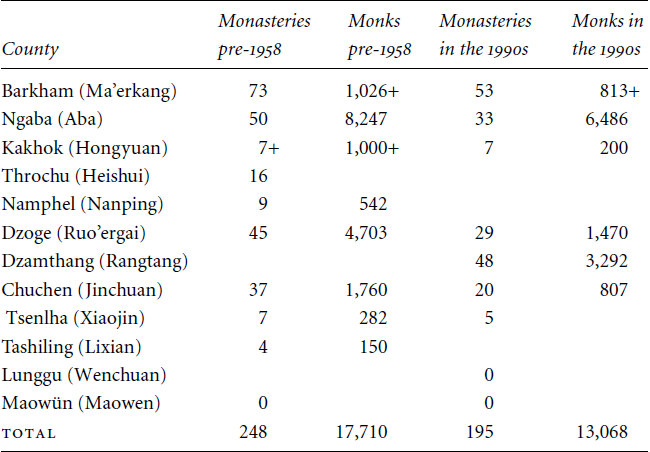 Gansu has two areas designated as Tibetan autonomous: Kanlho (Gannan) Tibetan Autonomous Prefecture and Pari (Tianzhu) Tibetan Autonomous County in Wuwei Prefecture. According to Pu Wencheng, there were 369 Tibetan monasteries in Gansu prior to 1958, with 16,900 monks and 310 tulkus. Of these, 196 monasteries were located within Kanlho TAP: 8 Nyingmapa, 2 Sakyapa, 9 Bönpo, and 177 Gelugpa. Pu does not indicate the number of monks in Kanlho before the Democratic Reforms campaign. In fact, none of the available sources provides complete information on the number of monks in Kanlho before 1958. However, Pu reports that there were 108 Tibetan monasteries and around 5,000 monks in Gansu in 1990. Of these, Kanlho had 89 monasteries and 4,700 monks. According to information from the Kanlho Prefecture government, by 1998 Kanlho had 121 monasteries and more than 6,300 monks. Detailed figures for each county add up to a total of more than 7,006 monks in Kanlho. 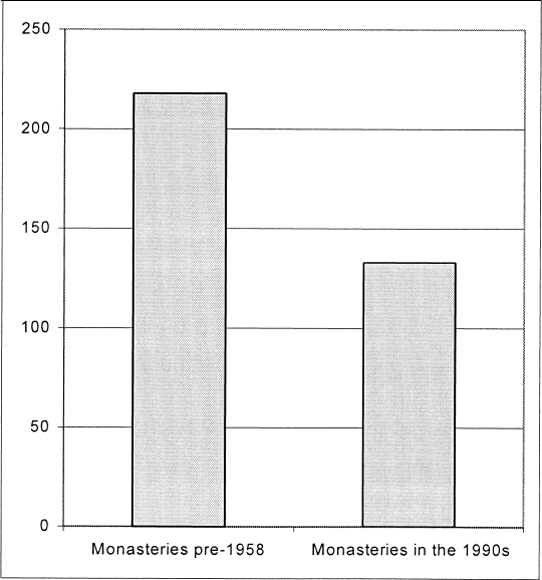 CHART A3.3. Monasteries in Gansu 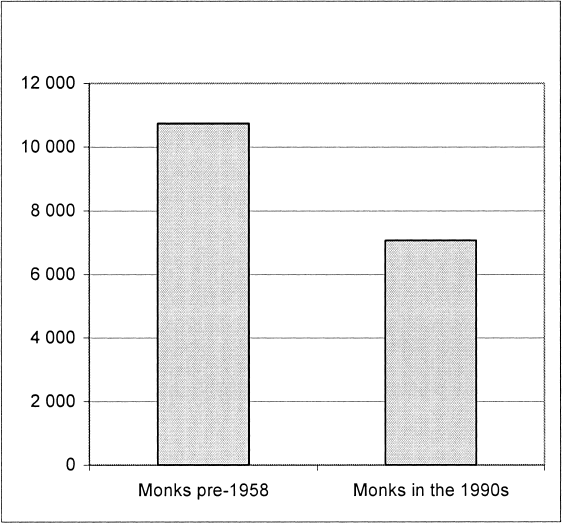 TABLE A3.4. Monasteries and Monks in Gansu Tibetan area

The Pari County History states that Tianzhu Tibetan Autonomous District (Pari’s official name between 1950 and 1956) had 14 Tibetan Buddhist monasteries in 1950. Establishment of Tianzhu TAC and related changes in boundaries in 1956 added 8 more monasteries, and the county then had 22 monasteries, 1,203 monks, and 35 tulkus. Pu Wencheng reports that in 1989, permission was given to reconstruct 12 monasteries in Pari. According to Pu, only 7 out of the original 173 monasteries had been rebuilt outside of Kanlho and Pari by 1990. In comparison, at least 101 out of 218 monasteries were rebuilt within the Tibetan autonomous areas. If this is correct, the Tibetan autonomous areas have much higher rates of reconstruction than does the rest of the province. Despite this, we have limited our comparisons to Tibetan autonomous areas of Gansu only. Specific information on pre-1958 and 1990s numbers of monasteries and monks in Kanlho TAP is in table A3.5. A breakdown of monasteries and monks in Pari TAC for the same time periods is in table A3.6.

SOURCE, MONASTERIES AND MONKS IN THE 1990S: Pu, Gan Qing Zangchuan fojiao siyuan, and interview with the Kanlho Prefecture Religious Affairs Department in Tsö (Hezuo), April 1999. Note: The total number of monasteries was said to be 121, whereas the county-level figures add up to only 119. Alternative figures are in parentheses.

Yunnan has only one Tibetan-designated area, Dechen (Diqing) TAP. The most comprehensive information, historical and contemporary, on the numbers of monks and monasteries in Dechen can be found in a study on Tibetan Buddhism in the prefecture edited by Sonam Dolkar. According to the study, there were a total of 24 monasteries in Dechen in 1949: 13 Gelugpa, 7 Kagyupa, and 4 Nyingmapa. Gyelthang (Zhongdian) County had 3 monasteries, Dechen (Deqin) County had 17 monasteries, and Balung (Weixi) Lisu Autonomous County had 4 monasteries. By 1994, at least 20 of these monasteries were being rebuilt. Many were still undergoing reconstruction at the time of our visit in 1998, although rebuilding began in the mid-1980s. 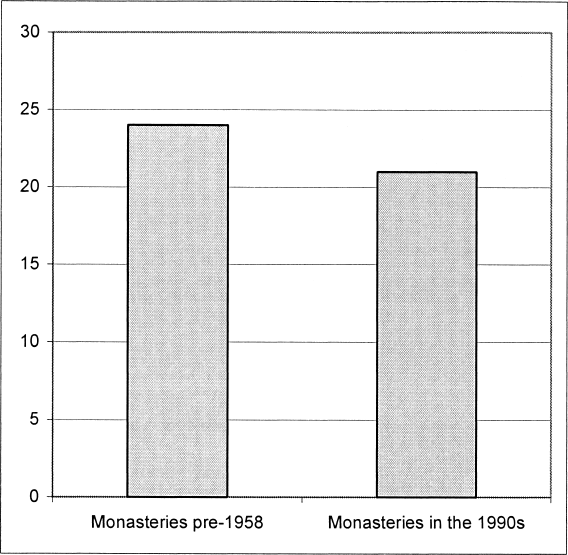 CHART A3.5. Monasteries in Yunnan 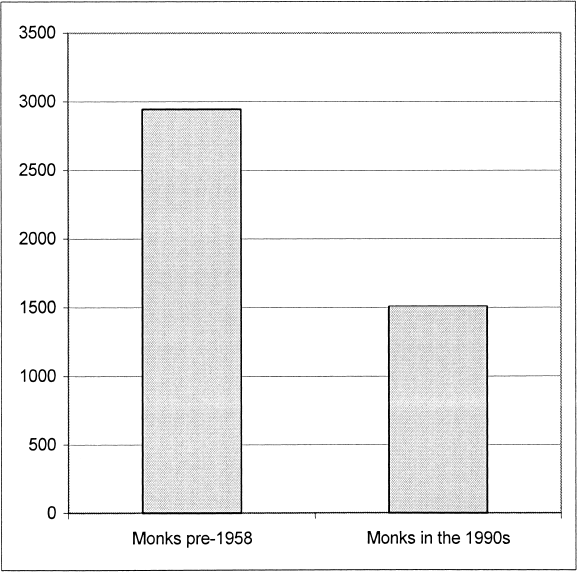 CHART A3.6. Monks in Yunnan

According to a 1998 Xinhua news report (BBC Summary of World Broadcasts, 4 April 1998), Yunnan then had 25 Tibetan monasteries. Local sources confirmed that at least 1 Tibetan monastery outside Dechen Prefecture had been rebuilt, the Karma Kagyupa monastery of Tashi Chomphelling, located in Lijiang Naxi Autonomous County. Because we had only limited knowledge of this monastery and other monasteries located outside Dechen, our statistics for Yunnan cover only the Tibetan autonomous area of Dechen TAP.

The Qinghai Province Ethnic Affairs Commission reported in an interview in 1999 that there were 2,085 religious sites altogether in Qinghai in 1996, with a total of more than 26,000 religious personnel (including monks and nuns, imams, and priests). These included Chinese Buddhist monasteries (19 sites with 28 monks), Muslim mosques (1,339 sites with 2,234 religious personnel), Christian churches (36 sites with 9 priests), Taoist monasteries (12 sites with 58 monks), and Tibetan Buddhist and Bön monasteries (666 sites with 24,478 monks). In addition, there were 3,650 monks who “travel from one monastery to another.” The total number of Tibetan Buddhist and Bönpo monks in the province was thus 28,128. There were 497 tulkus in the province, 73 of whom had been recognized since 1978. 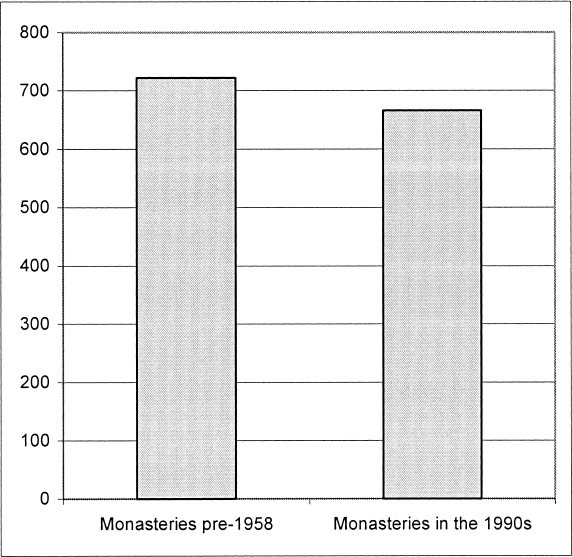 CHART A3.7. Monasteries in Qinghai 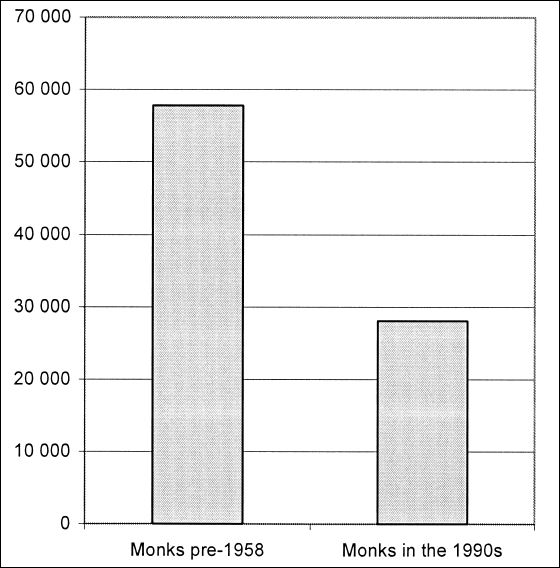 CHART A3.8. Monks in Qinghai

Our total figures for Qinghai cited in chapter 2 are drawn from Pu on the pre-1958 situation and from the Qinghai Province Ethnic Affairs Commission on conditions in the 1990s.

TABLE A3.8. Monasteries and Monks in Qinghai

Detailed information on each prefecture is presented in the sections below. The following table, A3.9, contains a summary of the prefectures for comparison (Xining Municipality excluded).

TABLE A3.9. Monasteries and Monks in Qinghai, by Prefecture

SOURCE, MONASTERIES AND MONKS PRE-1958 AND 1990s: Pu, Ganqing Zangchuan fojiao siyuan, 410–28. Notes: Figures in parentheses are from an interview with the Tsochang Prefecture Religious Affairs Department, July 1999. According to the Kangtsa County Religious Affairs Department, this county alone had 13 Tibetan monasteries with 430 monks in 1999, considerably higher figures than those reported by Pu.

TABLE A3.11. Monasteries and Monks in Tsonub (Haixi) Mongolian and Tibetan Autonomous Prefecture

NOTE, 1999 FIGURES: Figures in parentheses are from an interview with the Themchen County Religious Affairs Department, July 1999. Total figures including this information are also in parentheses.

SOURCE, 1999 FIGURES: Interview with the Tsochang Prefecture Religious Affairs Department, July 1999. Notes: Figures provided by the Gepa Sumdo County Religious Affairs Department are in parentheses. Total figures including this information are also in parentheses. An alternative source, Marshall and Cooke, Tibet Outside the TAR, reports that the prefecture had 113 Tibetan monasteries and 8,256 monks prior to 1958 and about 116 monasteries and 4,632 monks in 1995.

SOURCE, 1999 FIGURES: Interview with the Malho Prefecture Religious Affairs Department, Rebkong, July 1999. Note: Figures provided by the county governments are in brackets as are total figures including this information.

SOURCE, 1999 FIGURES: Interview with the prefecture government, July 1999. Note: Number of monasteries by Buddhist order: Nyingmapa, 46; Jonangpa, 8; Gelugpa, 6; and Kagyupa, 1. Information from county governments is in parentheses as are total figures including this information.

SOURCE, 1999 FIGURES: Interview with the prefecture government, July 1999. Notes: Information from the prefecture government is in parentheses. Prefecture officials reported the quota for monks was 3,616 but said that this figure was much lower than the actual figure. They expected the quota to be 5,600–6,000 within the year, which gives a strong indication that the actual number of monks in Jyekundo was at least 5,600.

TABLE A3.16. Monasteries and Monks in Haidong Prefecture 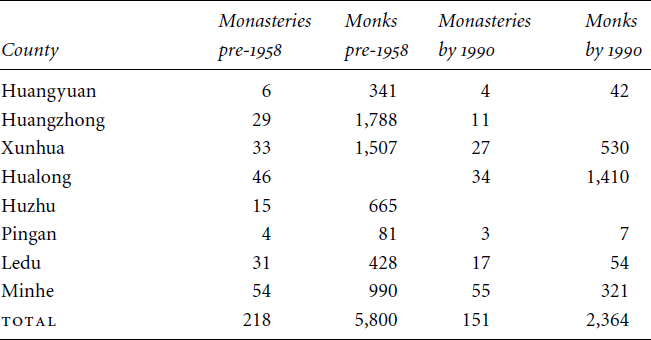