Penelope Unraveling Her Work at Night 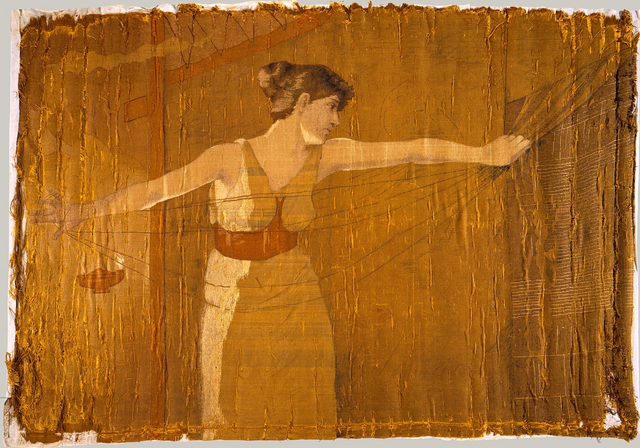 Penelope, loyal and resourceful wife of Odysseus, secretly unravels her day's weaving at night to postpone the completion of her web and remarriage in Odysseus's extended absence.

Penelope stands in the center facing out toward the viewer. She turns her head to her left to look back at her loom behind her, where the tapestry she is weaving is hung. A small oil lamp on the left indicates that the scene takes place at night. By the lamplight, Penelope unravels her weaving. When her husband, Odysseus, failed to return home to Ithaca immediately after the conclusion of the Trojan War, Penelope began to be courted by suitors who pressured her to pick one of them to marry. To avoid marriage to one of these suitors, Penelope asked them to allow her to first finish weaving a web to eventually be used as a burial shroud for Odysseus's father. Every day she would weave, but every night she would unravel her weaving, indefinitely postponing the day of remarriage (until her ruse was found out).