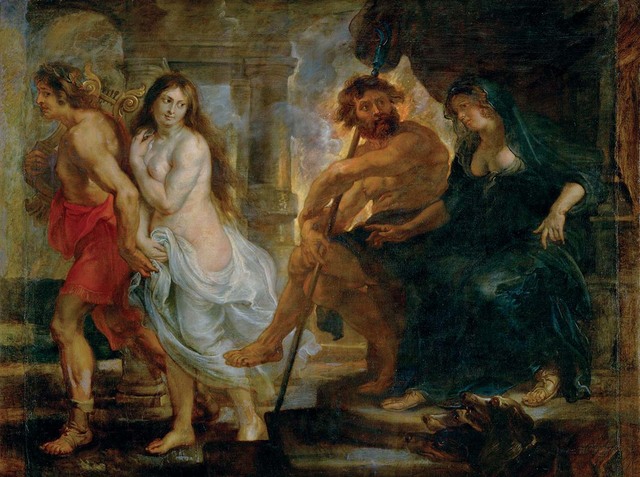 A glowing rendition of the Orpheus and Eurydice myth by the Flemish Artist Peter Paul Rubens and his worksop. 1636 - 1638. Oil on canvas. Museo del Prado.

Just as in Classical art, Hades' Early Modern depictions reduce the God of death to a somewhat secondary subject. Here, Peter Paul Rubens somewhat sidelines the deity in favor of a more central focus on the hero Orpehus and his bride While the two pairs of figures (Eurydice and Orpehus, and Persephone and Hades) are equal in size, Eurydice's glowing skin and stealth attract the eye while Hades' dark coloring allows his form to recede into the background. Hades is a god whose own specific myths and narratives are comparatively sparse to his Olympian relatives. He is most famously known for his abduction of persephone (a myth that reverberates into this painting with persephone's presence in the underworld), but this myth is more famously understood through persephone or Demeter's perspective. Rather, Hades is often a secondary character, a god whose presence in mythology is most commonly in service to another, more epic tale. Hades' presence in Ruben's painting is more contextual- he signals the underworld and thus helps clarify the subject matter to the viewer. He is simply an indication of a larger myth being told.