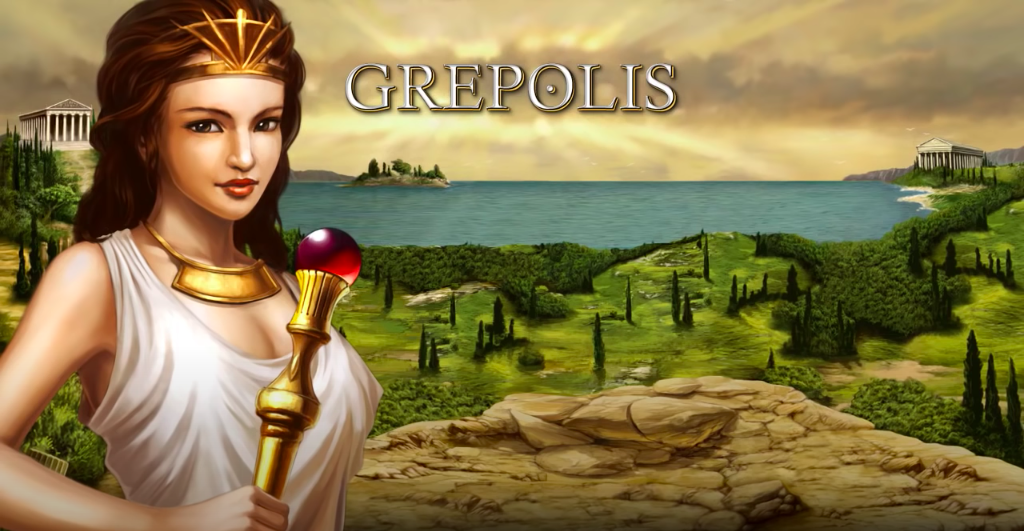 Uploaded by game developer InnoGames onto the video streaming platform YouTube, “Hera Theme Song” is a 2:10 long orchestral tune with an unchanging background image of the Greek goddess Hera in front of the playing field for Grepolis; a free, browser based online game. InnoGames introduces Grepolis as the chance to craft a unique adventure through the world of the Ancient Greeks (2009), starting out with a small polis that can eventually upgrade up to a metropolis through boosted skills, battles, trades, and the favor of some Olympian gods. Each god/goddess in the game reflects their commonly known characteristics, and like the power of Olympian gods in Greek myth, players of Grepolis are at will to change the course of these online civilizations at any moment of play, engaging meta-textually with the influence or explanation of events and stories (i.e. famine, war, heroes) by Greek myth and mythological figures. By winning the favor of Hera in-game players can receive increases in resource production and protection of citizens, mirroring Hera’s epithets and interventions in mortal affairs as described in Greek myth, and with this purposeful game design Grepolis allows players to intervene and act as “god” to carve a trajectory of tragedies and fortunes for humanity in story form.

In game, Hera provides a skillset that proves her to be the “protector of families,” by giving strength to player’s citizens, increasing resource production, and protecting farmers (Grepolis, 2009). Hera’s bonuses to players of Grepolis along with her character design (wearing a crown, wielding a scepter) relate to her cult epithets of representing marriage, family, and childbirth and standing as a queen, wife, and mother, particularly in relation to Zeus, king amongst gods and father of many (La Fond 06:50-08:34). Classical Mythology provides countless examples of conflicts between gods and involving gods, remarking that while gods are typically distant observers of mortal conflict, “... individual gods and goddesses sometimes take part in battle by helping or protecting their mortal favorites (Morford et al, 523),” as seen in the theomachies as well as throughout the events of the Trojan War.

A poignant example of gods and goddesses intervening in mortal affairs begins with The Judgement of Paris. Following a banquet celebrating the marriage of Pelius and Thetis, Hera is involved with Aphrodite and Athena in a dispute over who is the fairest, wherein Zeus appoints a mortal man, Paris from Troy, to make judgement instead. All three goddesses vye for his vote, and ultimately Aphrodite is the victor as she persuades him with the promise to marry the most beautiful mortal woman, a Greek named Helen from Sparta (Morford et al, 493-496). By choosing Aphrodite, Paris not only received the promise of Helen but also the opposition of both Hera and the Greeks, with the Greek expedition to retrieve Helen from Troy sourcing the mythological basis of the Trojan War. In one such episode of the war, the Iliad mentions when Hera calls on her son Hephaestus to use his powers of fire against the river and god Scamander, which was about to engulf Greek hero Achilles (Morford et al, 148). This intervention allows Achilles to advance on the Trojan army, carving a trajectory for the siege of Troy after Athena’s assistance in killing Hector (Morford et al, 519). In this case, the intervention of multiple gods and goddesses can make significant changes to a story’s course and people’s outcome.

Instead of asking, “do you want to follow in the footsteps of Odysseus, Leonidas, the beautiful Helen, or other Greek heroes, (Grepolis, 2009)” the homepage of Grepolis should ask if players want to experience the power held by the gods and goddesses. As opposed to operating in the point of view of heroes or other significant mortal characters in Greek myth, Grepolis allows players to carve a story with its own course and unpredictable outcomes, or essentially change everything by the power of Greek gods and goddesses. The choice to intervene in the gameplay’s societal development is meta-textual to the intervention of gods and goddesses throughout multiple stories of Greek myth.

Hera’s Theme Song, a two minute and nine second instrumental and musical score written for an online browser game called Grepolis. Hera is the face of this deep and intense song intentionally made for Hera as she is one of the first deities dedicated to a temple sanctuary. As this song is directly from the game, Grepolis, there will be points made from the game itself that relate to Hera and how it has an impact on her theme song to support the entirety of this analysis. This theme song evokes a unique character development aspect in comparison to the Greco-Roman myths in which climatically does not portray Hera as an independent goddess and heroine.

I will be focusing on Hera, who is the wife of Zeus the goddess of marriage and birth. In this game, each hero or heroine has a specific power and description if you pick them as a “favor”. And Hera’s is, “Hera is the goddess of the family. She gives your residents strength and courage. Her wedding spell increases your resource production for a short period of time, and also warms up your trembling farmers on cold winter days” (Klindworth, Grepolis). Hera is depicted in this description as very courageous, selfless as she is willing to do whatever is necessary to defeat the opponents. This is somewhat correlated with the Greco-Roman Myths from (LaFond, 2.5 - PowerPoint Slide 12), “...was prominent throughout Greece, and in fact her temples are the oldest and most important in Greece…”. One of the many great characteristics that Hera embodies is how she stands with the rest of the gods while holding her own as Zeus’s wife which can be difficult at times as her power was usually undermined by his wrongdoings. For instance, “While Hera played an important role in Greek religion, her presence in myth was more limited: she mainly appears as the jealous wife, unhappy with Zeus for his affairs...” (LaFond, 2.5 - PowerPoint Slide 12). Although Hera can be conceived as someone who is jealous and upset at Zeus for his affairs which is a very normal response with the amount that Zeus ends up doing. However, through these hardships that Hera had to endure throughout most of her relationship with Zeus, it is very apparent how resilient, emphatic, and forgiving she was.

This song, “Hera Theme Song”, in particular portrays Hera as the courageous and empathic goddess she is. I find this to be a very interesting contrast between how she is described in Greco-Roman myths versus how she’s described in Grepolis. In other words, she was described as the goddess who could cast spells to increase your resource production while providing heat for your farmers during the cold winter days. To add on, throughout the entire theme song, she stands upright with her closely shaped lotus-tipped sceptre which is something that was not as commonly shown in the history of Greco-Roman myths as she frequently had to worry about Zeus. What this positive description of Hera means to me is that she is what she would have been described in the Greco-Roman myths if Zeus did not act the way he did. This theme song adequately depicts Hera as the true heroine without being in the shadow of Zeus and known as the “jealous wife”. The Hera Theme Song not only demonstrated her incredible capabilities, but her strength to persevere through adversities she faced.

Hera theme song, created by InnoGames, is a soundtrack tied to Hera’s appearance in the Greek Mythology game called Grepolis. Grepolis is a free-to-play browser game that everyone can access. The concept of the game is based upon a city or “polis” where you can develop skills, mine resources, and spend time to upgrade your polis into a great city with the help of some Olympian Gods such as Zeus, Hera, Athena, Hades, Poseidon, and Artemis. Much like Greek mythology, the favor of these gods can be the “x-factor” in your battles with other cities. Specifically, players will gain advantages through the favor of Hera, the goddess of family, with means such as resource production increases or helping out farmers during the winter.

Despite being the queen of the gods who bestow strength and resources to married women, as portrayed by her powers and appearance in the game, the eerie music from the soundtrack also reminds the audience of Hera’s character development during her relationship with Zeus including her vengeful nature towards those who crossed her. In the game, Hera appears to be a goddess who will help the people that choose her by giving the player more crops, resources, and also helping out during the winter where resources might be scarce. Such characteristics are representative of the Hera depicted in the Homeric Hymn to Hera, where she is known to be the goddess primarily of marriage and family. (Morford et al, 118) Hera is seen to carry a ruby specter and a diadem worn over her forehead in the game which is reflective of her role as the protector of marriage and is presented as a symbol for married women. (Morford et al, 119) According to the Homeric Hymn to Hera, Hera’s poetic epithets such as “cow-eyed” and “white-armed” emphasize her beauty by illustrating her dew eyes and porcelain skin which is seen in the games where her fair skin is accompanied by a white satin dress. (La Fond, PowerPoint Slide 75)

The theme song of Hera in the video game starts with a slow but unsure beat that gives off an eerie tone. However, as the song progresses, the tone and the beat become more convincing and gains momentum. Towards the end of the song, the singing becomes louder and the tone of the song illustrates emotions close to anger and revenge. In other words, the song can depict how Hera felt from the start of her relationship with Zeus and how her journey with Zeus’s affairs and illegitimate children affected her, thus reminding the audience of how atrocious Hera can be. The timid beats at the beginning of the song represent Hera’s doubtfulness in marrying Zeus as Zeus has tricked her by exploiting her empathy towards other beings. Zeus poses as a bird and pretends to be freezing from the cold to which Hera holds it to her breast, warming it up. Upon realizing that it is Zeus’s trick, she had to succumb to Zeus’s plea for marriage as she was ashamed for having been exploited. (GreekGods, 2016)

Hera’s most prominent vengeful act is one towards Io, resulting in the servant turning into a cow. This was illustrated on a metope, along with another painting in which Hera judgmentally scorns Zeus, who on his right hand has the head of a white cow (Io). (Morford et al, 118) Although Greek Mythology depicts her to be a vengeful wife, her actions are true to her role as Goddess of marriage whose function is to uphold the ethics of marriage.

GreekGods. “Hera.” Hera, Goddess of Marriage and Childbirth, Queen of the Gods - Greek

us.grepolis.com/. Made in Hamburg, Germany